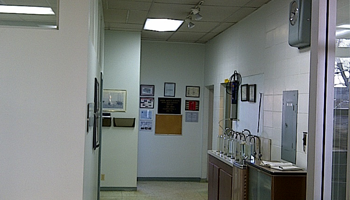 UWSS has installed new LED lighting in the water operators’ area as well as the administrative offices, as part of ongoing projects to rehabilitate the aging Ruthven Water Treatment Plant. New LED fixtures were installed during the week of January 21, 2013. The new LED lighting fixtures produce a light that closely mimics natural lighting, whereas the previous fluorescent fixtures emitted a light with a harsh yellow quality to it.

This is a pilot project with the intent to assess the cost savings and Return on Investment (ROI) for the LED fixtures. The LED retrofit fixtures use approximately half the electricity to produce the same light intensity than the previous fluorescent fixtures. Further, each LED fixture is guarenteed, under warranty, to last at least 7 years before needed to be replaced. Secondly, the new lighting is designed to provide 90% natural light and is reported to minimize the effects of Seasonal Affective Disorder otherwise know as the “winter blues”. The hope is that the more natural lighting will help operators feel more alert during their long shifts and will be easier on the eyes for the office staff.